Deanna Durbin had the voice of a lyric soprano. A voice of such brilliant technique that she could of easliy been an opera star!

In 1935, seven miles from the Durbin family home, a producer from MGM was on the hunt. The studio was planning to make a movie called GRAM which was the life story of the opera singer, Ernestine Schumann-Heink who was the greatest contralto of all time. Schumann-Heink had a rich and opulent voice of extraordinary flexibility and vast range, so MGM needed a child singer of exceptional ability to portray the diva as a girl.

Meanwhile, an agent named Jack Sherrill heard of the MGM requirement. One day a student at the Ralph Thomas Academy named Olive White called Sherrill’s assistant, Rita Warner in quest of a singing engagement. During the conversation Mrs. Warner asked Mrs. White if there were any promising children at the academy who might fill the GRAM requirements. Mrs. White said that there was one that might be worth investigating. As a result of that call, Sherrill visited the academy and heard Edna May Durbin sing.

Along with her mother, Sherrill took Edna May off to MGM, where she sang Il Bacio for one executive after another, to mounting enthusiasm. Louis B. Mayer, their boss, was in New York at the time, but his executives got him to listen to Edna May sing over the telephone. Mayer immediately gave her a contract. Whereupon Schumann-Heink fell ill, causing MGM to eventually shelve GRAM and lose interest in Edna May. But soon after, Universal Studios signed the brilliant young Edna May and changed her name to Deanna Durbin. And that famous name has haunted MGM ever since! 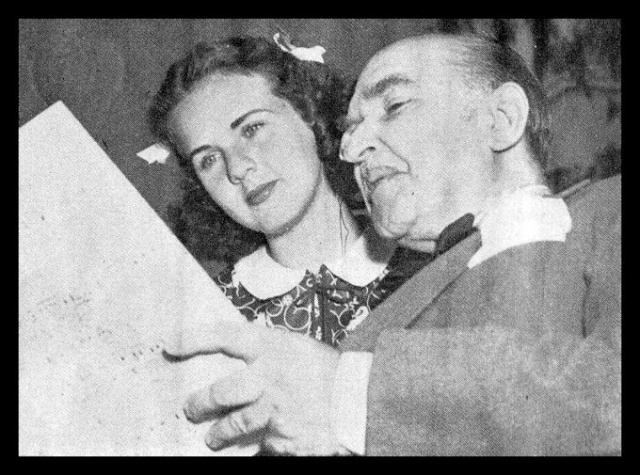 Even though Deanna Durbin didn't make opera a career, her renditions of opera arias in Universal movies have made her a legend!

In late 1936, Cesar Sturani, who was the General Music Secretary of the Metropolitan Opera, offered Deanna Durbin an audition.

Deanna turned down his request because she felt she needed more singing lessons.

Also, Deanna was happy being in the movies.

All that fame and fortune was a big incentive for Deanna to keep to one thing! 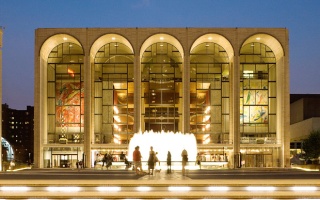 Back in 1944, because of production requirements, Deanna Durbin had to turn down a singing offer which was a lifelong ambition.

Deanna received a wire from the Chicago Civic Opera Company asking her if she would consider a guest concert appearance at the Chicago Opera House for January of 1945.

Felix Jackson, producer of Deanna's pictures at Universal Studios, tried to juggle the schedule of her next picture called LADY ON A TRAIN, but wasn't able to arrange it so the star ended up missing out on a golden opportunity! 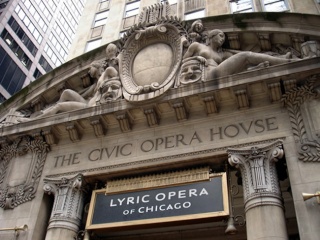 At a party given by Irving Thalberg both Deanna Durbin and Rosa Ponselle sang.

Deanna got more applause than Rosa and also received a huge basket of flowers from Thalberg! 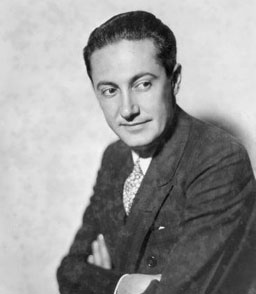 It was reported that James Durbin turned down a $5000 a week radio offer so that Deanna would be free to sing with the Metropolitan Opera. 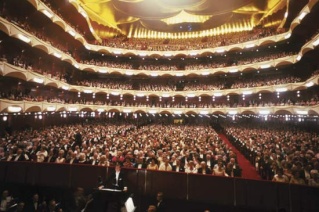 Andres de Segurola believed that Deanna Durbin had an excellent opportunity to become an opera star. He had been commissioned by the Metropolitan Opera to watch her progress carefully and keep them advised. He said that Deanna already possessed fully developed vocal organs, and her voice will change only in volume as she grows older. He recommended a delay of three years in her operatic debut for the reason that more preparation will enlarge and enrich an already mature soprano voice. He described the quality of her voice as a perfect blue white diamond, and just as rare - a voice one in ten million. Andres also said that Deanna had invaluable assests of charm, poise, and beauty. 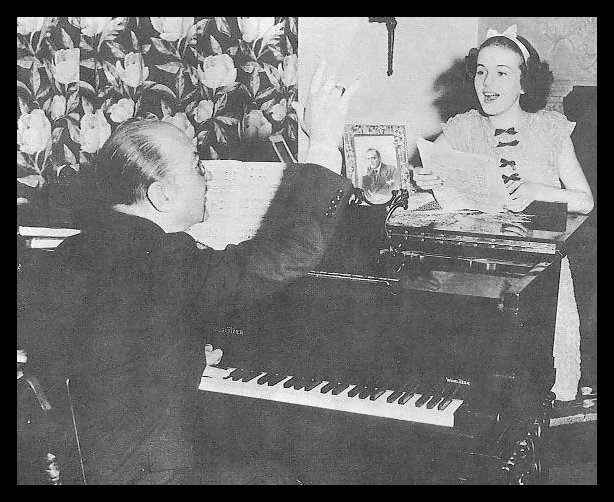 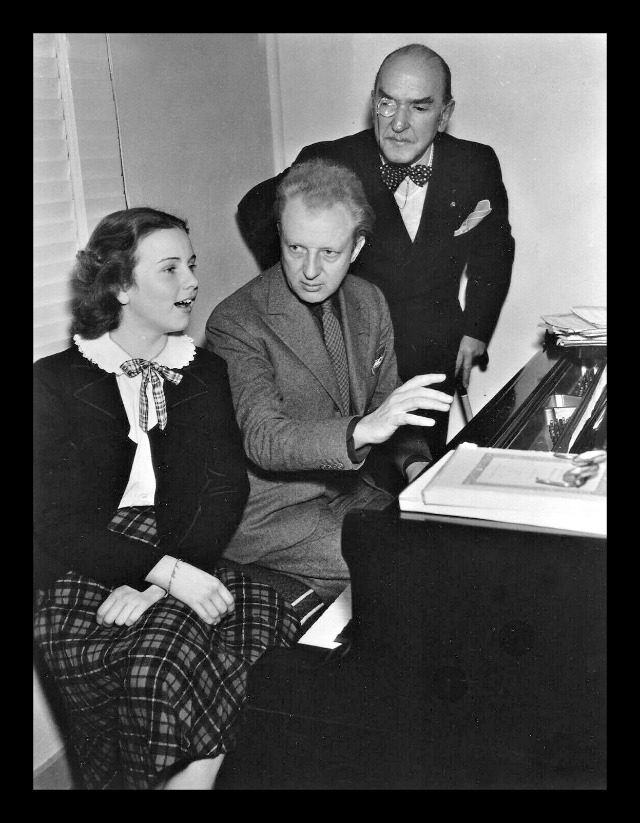 After making 100 MEN AND A GIRL, Deanna Durbin was given a small caricature statuette of Leopold Stokowski. And Deanna also became the happy owner of a porcelain elephant she found in Andres de Segurola's house.

It was reported that Deanna Durbin was to sing Violetta with Jan Peerce at the Hollywood Bowl in 1948, but it never happened.

However, check out SOMETHING IN THE WIND to see Deanna singing a duet with Jan in English from Verdi's IL TROVATORE. 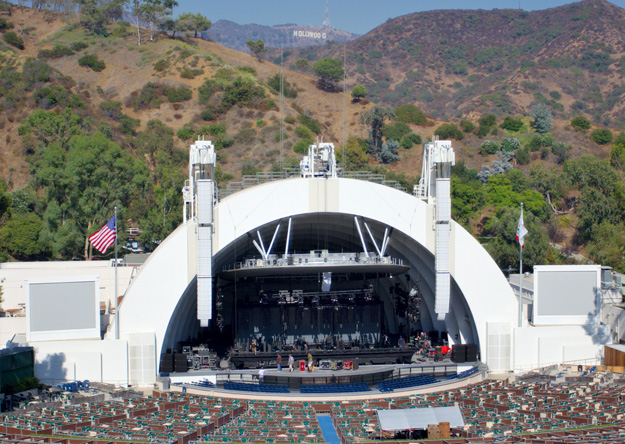 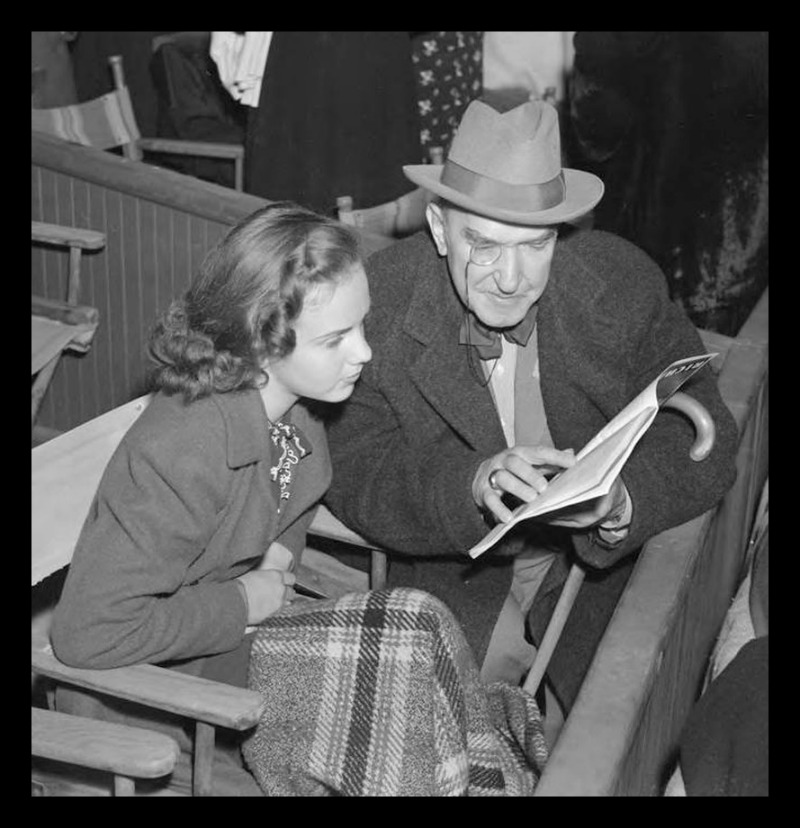 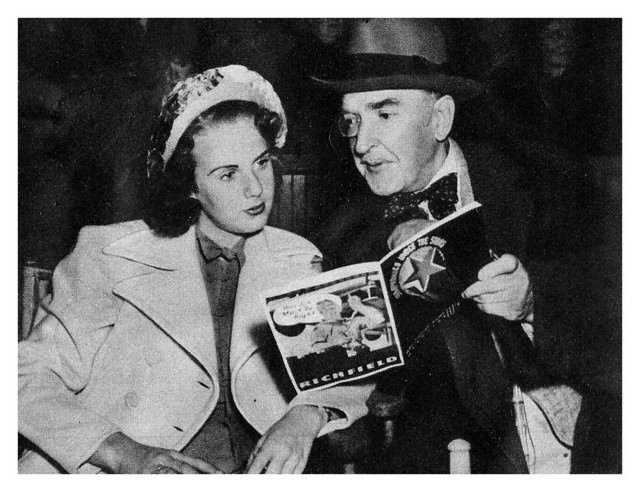 Right from the start of Deanna Durbin's movie career, Andres de Segurola was her singing teacher. He carefully nursed and developed her voice preparing it for the opera stage. Deanna's range of voice was from A below middle C to E above high C. She became a superstar when the public heard her sing on the radio and the screen, but actually, Deanna's beautiful, strong, clear soprano voice sounded even better when heard live! 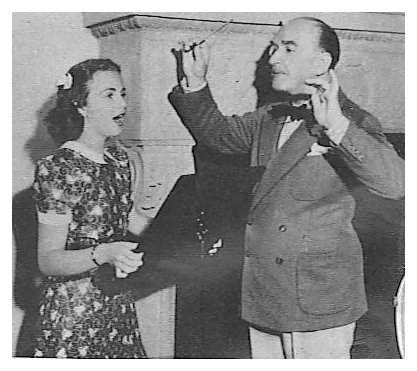 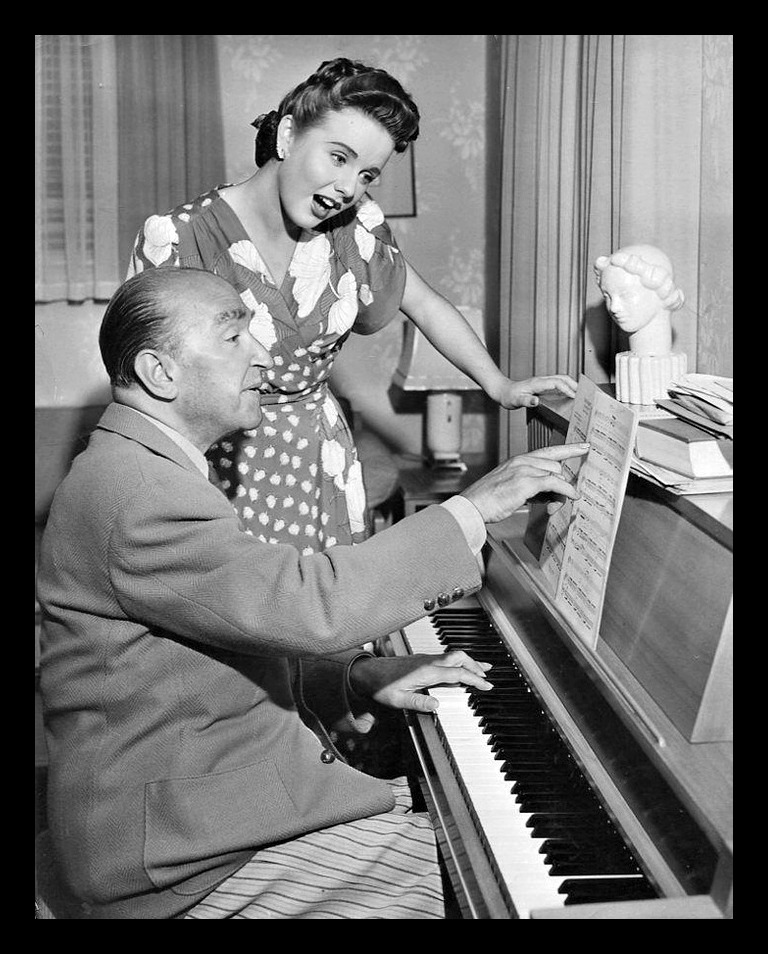 The famous coloratura soprano, Lily Pons said the following about Deanna Durbin: "The greatest child singer ever, of either sex." 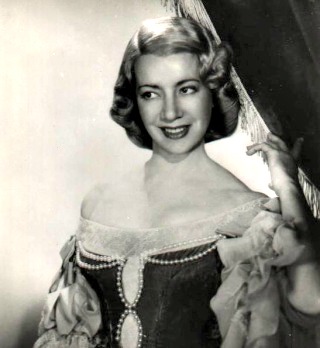 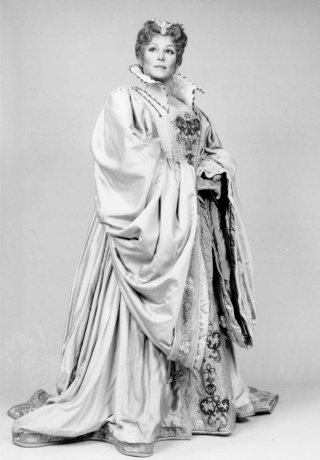 The great Joan Sutherland was a fan of Deanna Durbin. She loved Deanna's movies and said she had a beautiful voice and natural acting style - "She made it all look so easy. I wish I knew how she did it!" 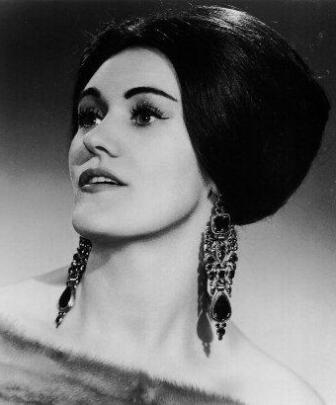 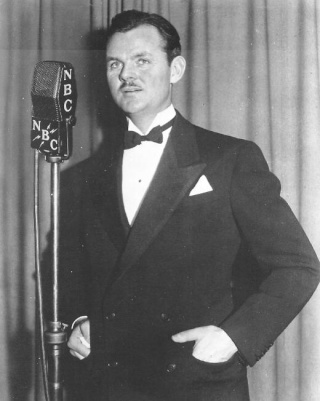 Grace Moore (1898-1947) who was a famous American operatic soprano and actress in musical theatre and film, said in comparison to herself, Deanna Durbin was the better singer. 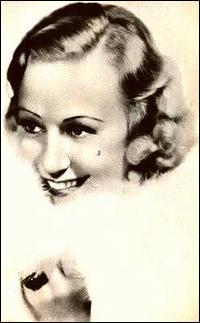 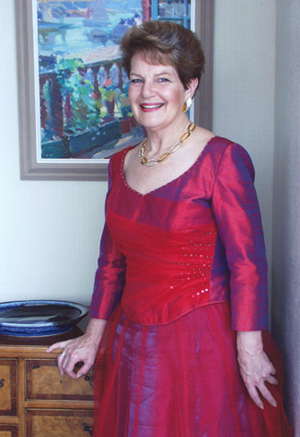 Famous Dutch soprano, Elly Ameling said the following: "Deanna Durbin - there was something so pure in her singing. It was magical. I heard some of her records when I was about ten. It was magical and I began to sing her repertory myself." 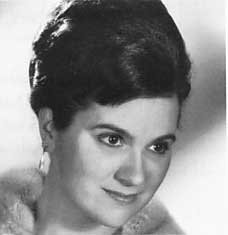 As a young girl in Athens, Maria Callas would watch the movies of Deanna Durbin, and was so entranced by that child-star’s utterly perfect voice, she vowed to become an opera singer. 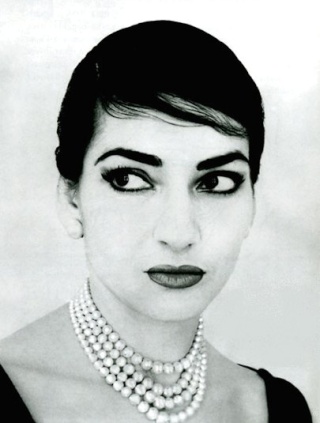 Lauritz Melchior (1890-1973) was a Danish and later American opera singer. He was the pre-eminent Wagnerian tenor of the late 1920's, 1930's, and 1940's, and has since come to be considered the quintessence of his voice type. Between 1944 and 1952, Melchior performed in 5 Hollywood musical films for MGM and Paramount Pictures. In 1947, he put his hand and footprints in wet cement in the forecourt of Grauman's Chinese Theatre in Hollywood. 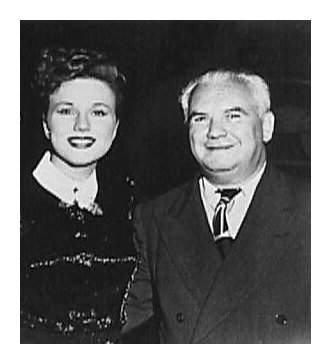