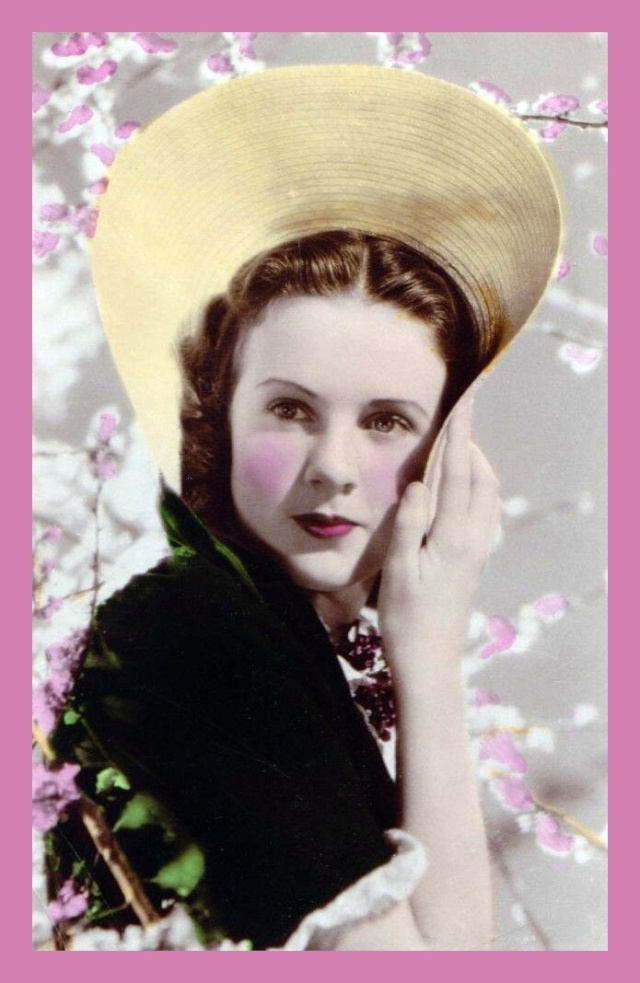 James Durbin once presented Ada a platinum wedding ring to replace her original gold ring. Ada then used the gold from her old ring and made two rings - one for Deanna and one for Edith. Deanna's ring was set with a zircon and 6 diamonds. 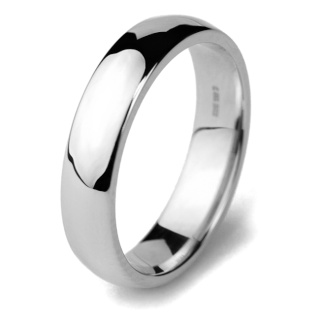 As usual, her fans were out in force to see their favourite actress as she went from one Washington site to another.

A police escort saved Deanna's beauitful bright green outfit from over enthusiastic souvenir hunters. Her hand was working overtime signing autographs until someone put a stop to it.

Deanna was also greeted by newspaper theatre critics at a dinner at the Mayflower Hotel.

From Union Station, the blue-eyed star was driven through milling throngs to Capitol Hill. There again she upset routine and posed for pictures with a number of smiling Senators.

Then she was greeted by Vice President Garner and stopped all Legislative proceedings by appearing on both the Senate and House floors.

"What do you think of your Washington recpetion?" Deanna was asked.

She gulped twice and blinked. "It's fine, I guess."

On more than one occasion during the tour of important places, her car was stalled by crowds of admirers who flocked around, climbed on the running boards and pressed their noses against the windows.

At the White House, Marvin McIntyre, Secretary to the President, escorted her on a trip of inspection. Although she had little to say, Deanna showed unmistakable evidence of a youngster receiving the thrill of her life. 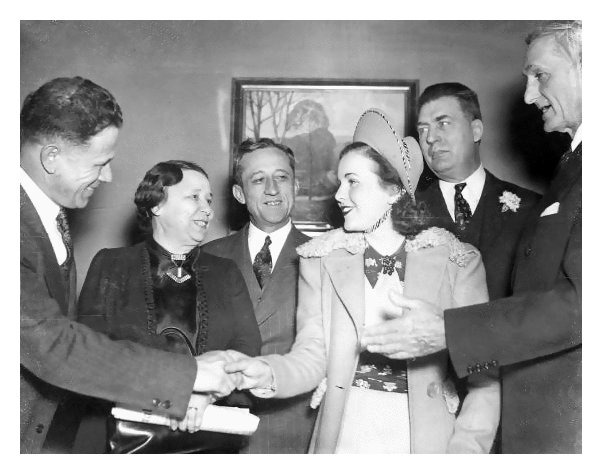 In 1947 when Los Angeles planned its Music Festival in the Hollywood Bowl, Deanna helped with the training of some of the children who were involved.

This is a photo of Deanna helping Jesus Martinez (piano), Maria Lopez, and Harry Tichnor: 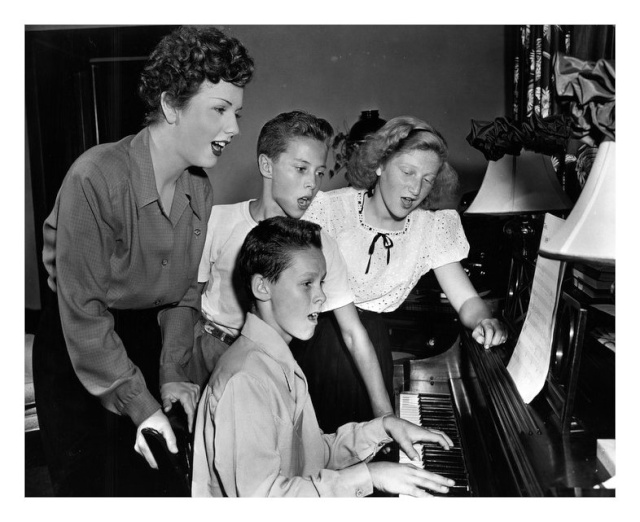 After LADY ON A TRAIN, it was planned for Deanna Durbin to be in a movie called MERRY MERRY MARRIAGE. The movie had a French slant to it and was about a girl who left her husband immediatly after her marriage. But Deanna's next movie turned out to be BECAUSE OF HIM. 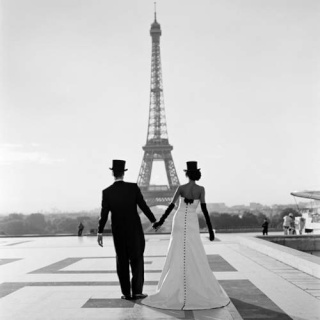 One of Deanna Durbin's stand-ins was Betty Harrison. She worked in many of Deanna's movies. As time went on, Betty was forced to wear shoes with four inch high souls because Deanna had out-grown her!!

Betty married in 1940, and then went under the name of Mrs. Fred Reinecke. 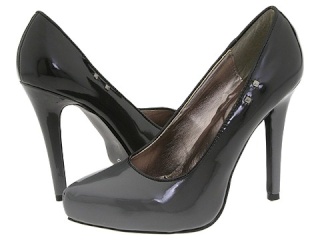 Deanna Durbin had to be escorted by police almost everywhere she went in public to protect her from the real danger of serious injury that could be caused by crazed fans rushing toward her. 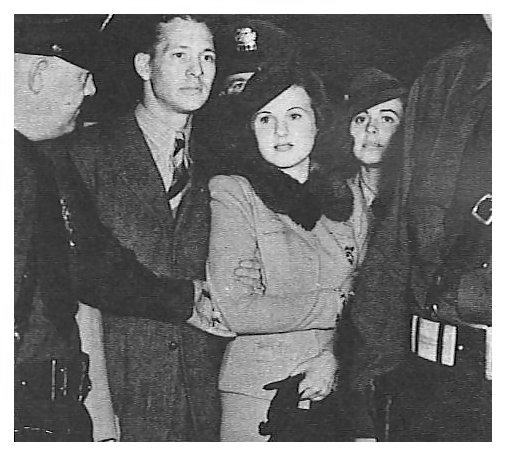 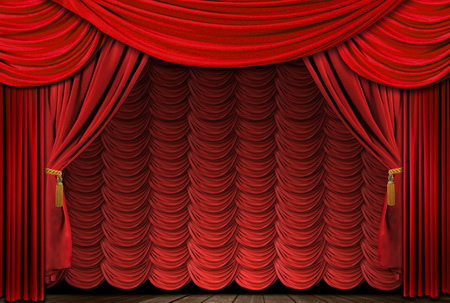 Deanna loved to dance the Waltz and the Foxtrot. She also tried the Lambeth Walk. 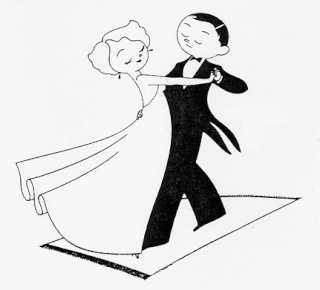 Deanna Durbin had recordings released with Polydor/Decca during her Universal years.

Il Bacio was the very first gramophone recording Deanna made and there were many more to follow. 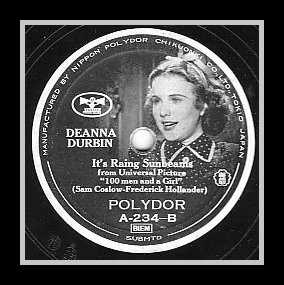 This is a photo of Deanna Durbin with Edward Maher and Lester Grady who were the editors of Liberty and Silver Screen magazines: 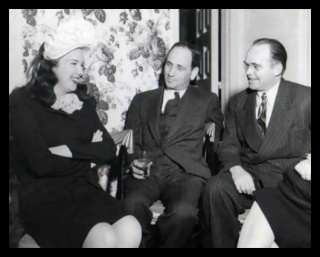 Deanna Durbin got a tremendous thrill when she saw the New York stage production of CAVALCADE written by Noel Coward.

The play opened in London on 6 September, 1931 and had 405 performances. Una O'Connor, Irene Browne, and Merle Tottenham originated their movie roles in the play. 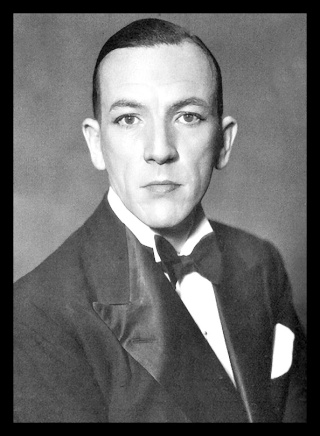 Deanna Durbin enjoyed the gramophone recording of Meet The Sun Halfway sung by Bing Crosby from the movie IF I HAD MY WAY. 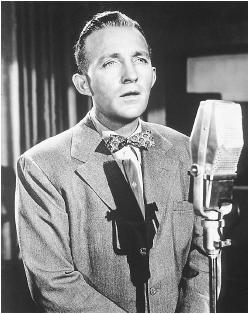 INTERESTING NOTE: Bing Crosby was keen in co-starring with Deanna Durbin in both TOP OF THE MORNING and A CONNECTICUT YANKEE IN KING ARTHUR'S COURT. Deanna's role in the latter went to Rhonda Flemming, who later recalled that her Hollywood career began when an agent approached her because of her resemblance to Deanna!

One of Deanna Durbin's favourite swing musicians was the great Dick Jurgens.

She would never get tired of listening to him playing Cecilia on the radio. 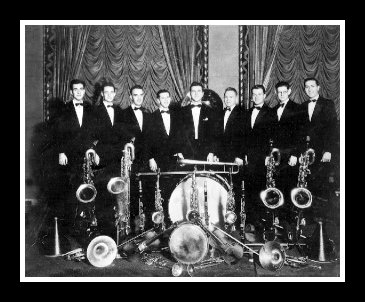 In early 1941, Deanna Durbin was returning to Los Angeles from a trip out east. Deanna stopped at El Paso because she was a guest of the Texas College of Mines Chi Omega Sorority.  At Union Depot Station, a terrified Deanna was mobbed by a 5000 strong crowd and her mother suffered two broken ribs during the crush!! Deanna was taken to the local police station for her own protection. Yet a bigger crowd was waiting for Deanna at the railway station for her homeward journey, so instead, the police organized for her to board the California-bound train at Ysleta. As she was waiting for the train to arrive, Deanna looked up into the night sky and said, "It's so quiet and peaceful here - I wish I could get out and enjoy the stars more often." Just before boarding the train, Deanna shook hands with the local group in a friendly fashion thanking each person individually. "I'm sorry I missed that quale dinner in Juarez," she said, "You know my stop in El Paso certainly has been an unusual one!" 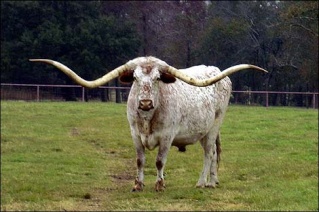 Deanna added the art of needlepoint (petit point) to her many accomplishments. 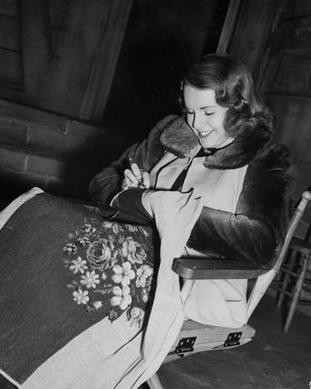 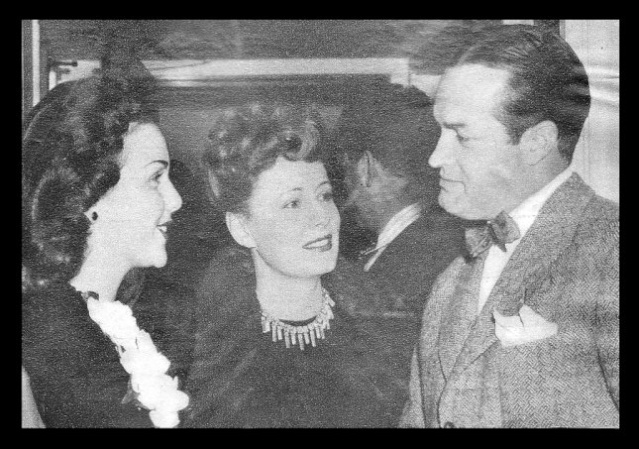 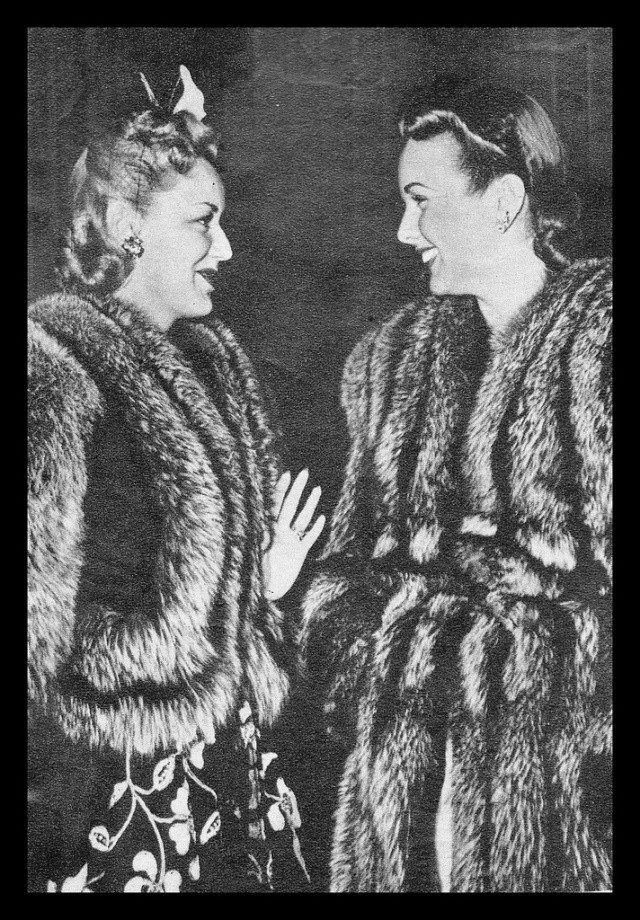 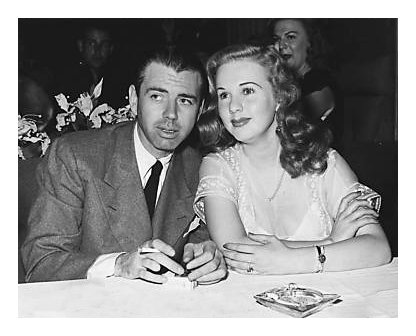 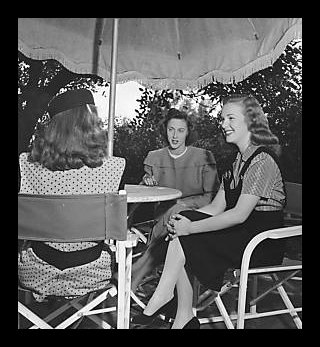 This is a November 1937 photo of Deanna Durbin with Freddie Bartholomew: 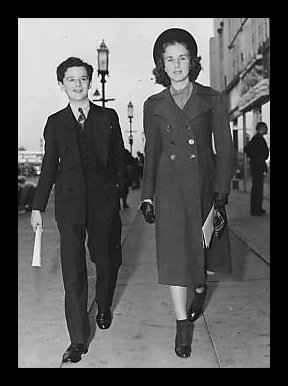 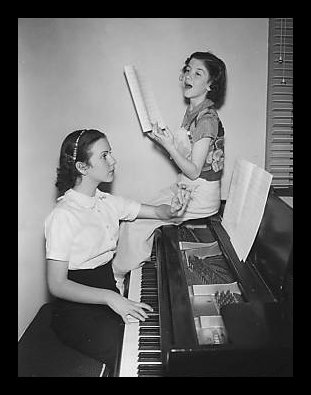 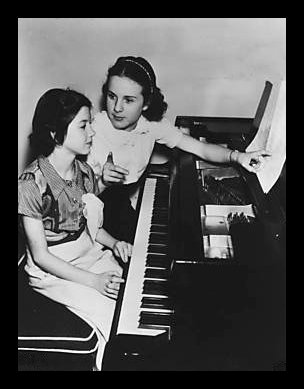 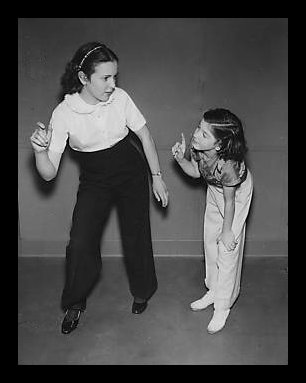 INTERESTING NOTE: Peggy Ryan celebrated her 80th birthday as part of Mike Fitzgerald's annual Universal reunions. Gloria Jean and other celebrity guests were announced and applauded. Then three telegrams for Peggy from well wishers were read out loud for all to hear. Gloria Jean took the microphone and read the final telegram from the sender congratulating Peggy mentioning the old days at Universal and regretting not being there in person. Then Gloria read the signature - "Love Deanna Durbin." There followed a deep, incredulous gasp from the elderly crowd. Everybody applauded warmly which was as much as a tribute to Deanna Durbin as it was to Peggy Ryan.

We can only guess what triggered Deanna Durbin to bite her nails. Before Deanna became famous, her father wasn't in the best of health and money was short. It could be that as a child those family difficulties played on Deanna's mind causing her to worry about home life. 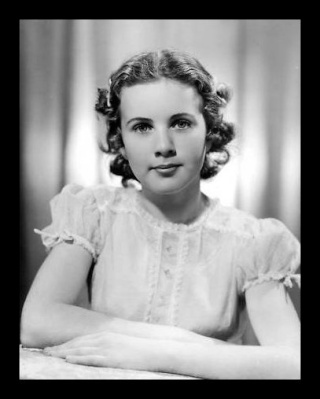 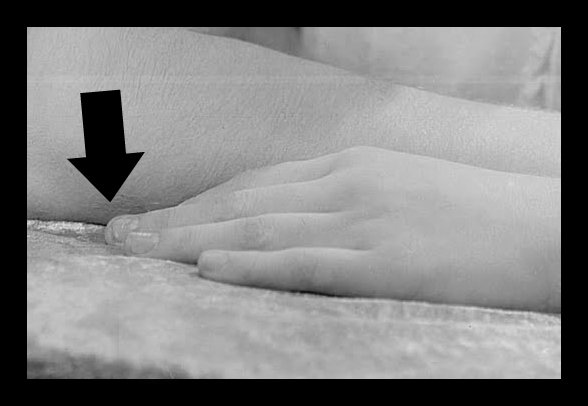 Nail biting or chronic onychophagia is the act of biting the cuticle, the soft tissue around the nail or the nail itself. It occurs in 28 to 33 percent of children ages 7 to 10 years old, 44 percent of adolescents, 19 to 29 percent of young adults, and 5 percent of older adults according to a study.

This irritating habit is more common in boys than girls, and can be seen during periods of nervousness, stress, hunger, boredom or lack of activities.

Most of the time, it is harmless habit that children eventually outgrow. In both children and adults, however, nail biting usually occurs unconsciously when the person is doing something else like reading a book.

In many instances nail biting is used as a tension reliever. Any kind of disharmony as a result of friends, family, work or school can trigger the habit.

Deanna Durbin saw her very first fall of snow when she visited Boston in 1936. 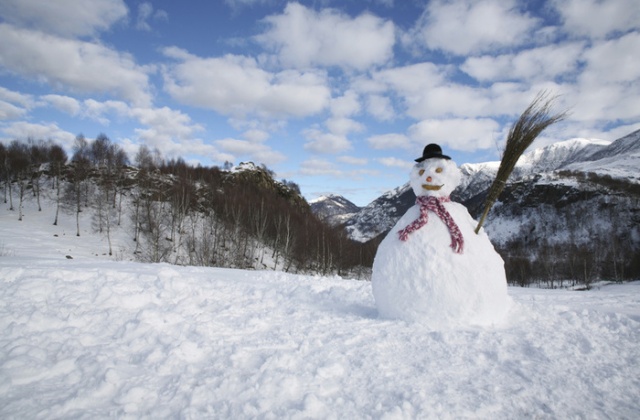 A very young Edna May Durbin seated first on the left before she became a huge Hollywood star: 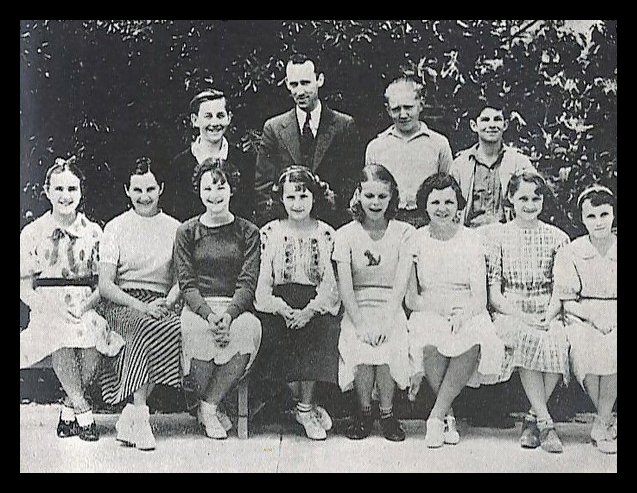