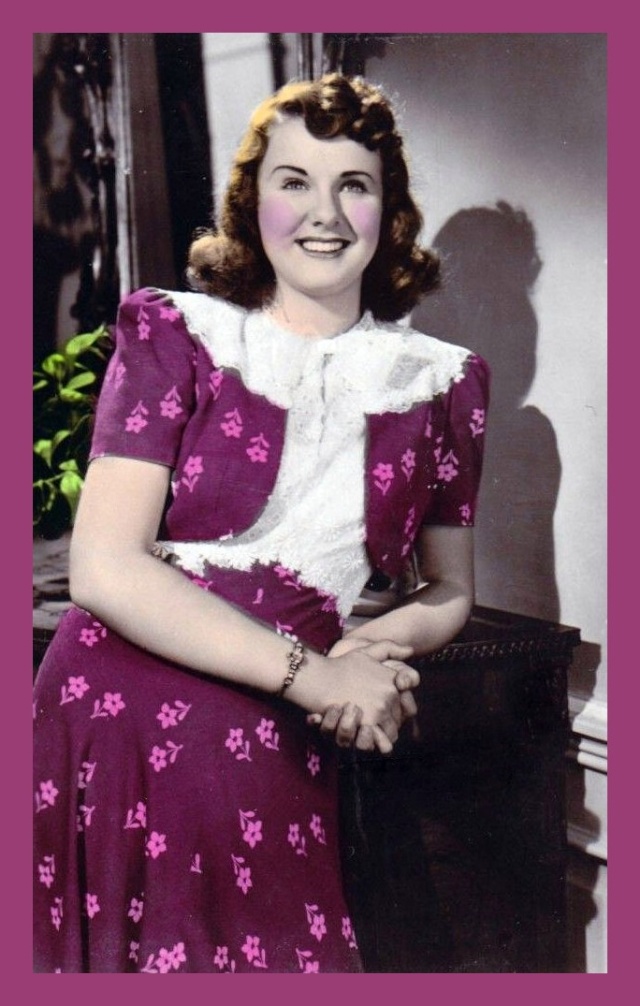 On one occasion when Deanna Durbin and her mother visted New York, poor Deanna had to either stay in her hotel room or if she did venture out, she would have to go with a guard. She would be whisked away in a big black limousine with fans running along the side of the car. Deanna was really concerned that someone could get hurt. 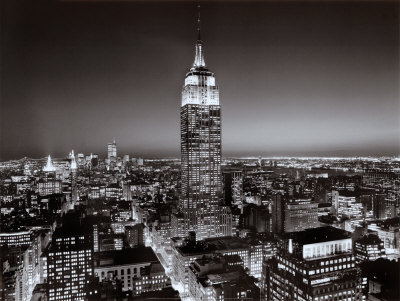 After the release of THAT CERTAIN AGE, Universal Studios were planning a movie for Deanna Durbin with working titles of either CINDERELLA or AFTER SCHOOL DAYS which they were considering as the first colour production for Deanna. However, THREE SMART GIRLS GROW UP was the next movie that was made followed by the black & white Cinderella story called FIRST LOVE. 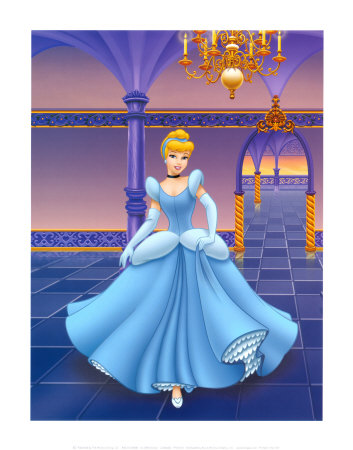 In 1946, Universal Studios planned to produce a movie called SONG OF NORWAY in colour which was an operetta based on the life story of composer Edvard Grieg. The Los Angeles Civic Opera Company produced SONG OF NORWAY in June of 1944 and then it opened on Broadway in August of the same year. Deanna Durbin was set to play the female lead of Louisa Giovanni in the screen version, but she never made the movie which was eventually released in 1970. 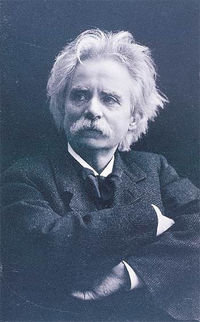 Deanna Durbin was the heroine of two 1941 novels both written by Kathryn Heisenfelt and published by Whitman Publishing Company. The heroine had the same name and appearance as Deanna Durbin, but had no connection. It is as though the famous actress had stepped into an alternate reality in which she was an ordinary person. The books were part of a series known as "Whitman Authorized Editions." 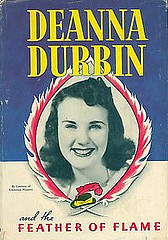 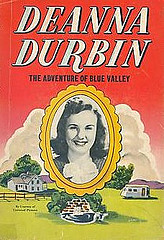 Deanna Durbin was thrilled that Leopold Stokowski took her to a dinner party held by Greta Garbo!! 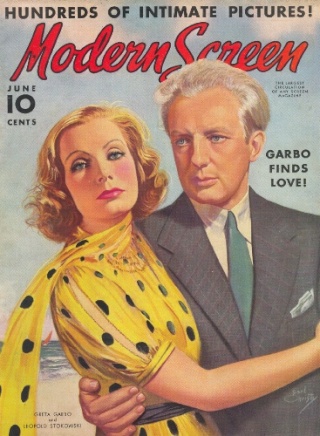 Deanna Durbin and her mother visited Winnipeg in April of 1937. They both took the opportunity to visit grandmother, Sophia Read. Deanna also sang on the radio and had breakfast with the Mayor of the City, Frederick Warriner. At City Hall she was presented with the Coat of Arms of Winnipeg and signed the distinguished visitors book. 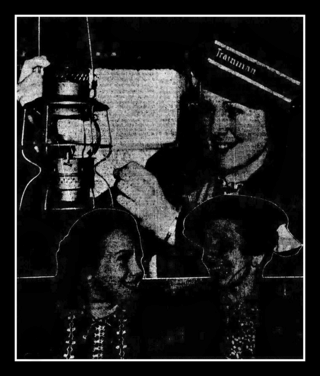 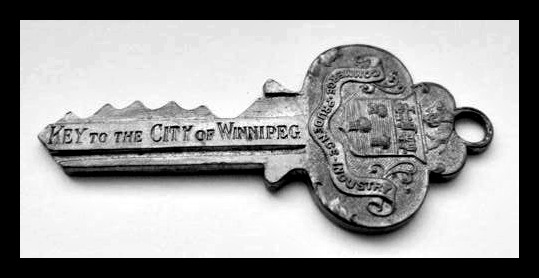 Have I Ever Told You

Mel Tormé (1925-1999) was an American musician, known as one of the great male jazz singers. He was also a jazz composer and arranger, a drummer, an actor in radio, film, and television, and the author of five books. He said that Deanna Durbin was one of his musical heroines:

"Durbin was phenomenal. Possessed of a glorious operatic voice, she could and did sing anything put in front of her to perfection!" 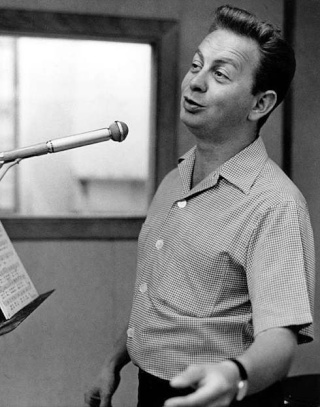 Be A Good Scout

In 1937, Deanna Durbin was given honorary membership of the Boy Scouts by Troop 42 of San Diego. 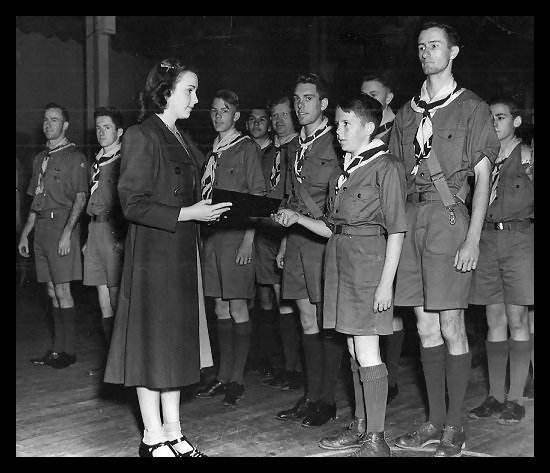 The next movie after BECAUSE OF HIM was to be called JOSEPHINE, but it turned out to be I'LL BE YOURS which was Deanna's first movie after the birth of Jessica. 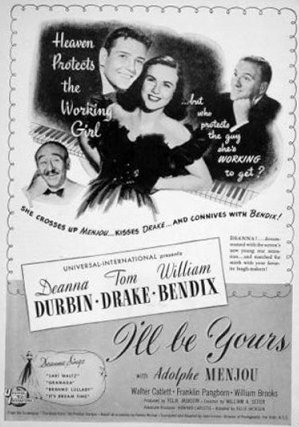 The story goes that one of Deanna’s friends came over for a swim in her pool. The girl ventured out beyond her depth and began to drown. Deanna was not a great swimmer, but she knew something had to be done, so she dove in at once and pulled her to safety. 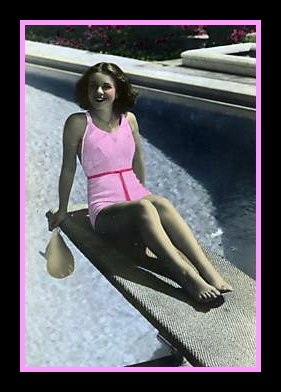 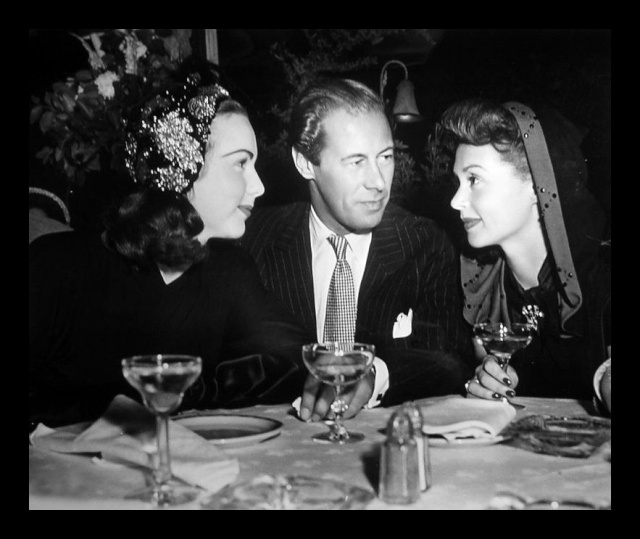 Rex Harrison (1908-1990) was born in Lancashire, England as Reginald Carey Harrison, but changed his name to Rex as a young boy, knowing it was the Latin word for King. Starting out on his theater career at age 18, his first job at the Liverpool Rep Theatre was nearly his last - dashing across the stage to say his one line, made his entrance and promptly blew it. However, soon he began landing roles in the West End. FRENCH WITHOUT TEARS, a play by Terence Rattigan, proved to be his breakthrough role. He attained international fame when he portrayed the King in ANNA AND THE KING OF SIAM. Rex is best known as Professor Henry Higgins in the original production of MY FAIR LADY. He won the Tony for the play and an Oscar for the film version. 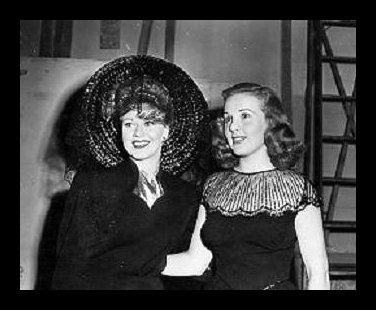 Ginger Rogers (1911-1995) was an Academy Award winning American film and stage actress, dancer and singer. In a film career spanning fifty years she made a total of 73 films, but is best known for her roles with Fred Astaire as his dancing partner in a series of ten Hollywood musical films. 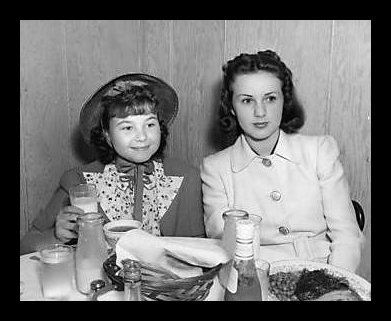 Jane Withers was born in 1926 in Atlanta, Georgia and was an American actress best known for being one of the most popular child film stars of the 1930's and early 1940's.

Deanna Durbin certainly thrust Universal into larger theatres being the first contract player that could, and on a repeated basis. It got to where lines formed for whatever she did. Deanna's movies were so popular that Universal was able to charge a 35 percent rental fee for them, while most Hollywood movies could only charge 25 percent. 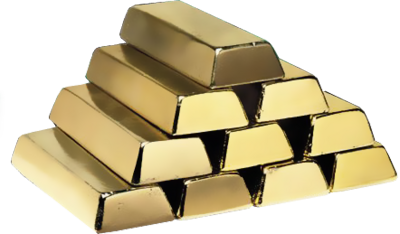 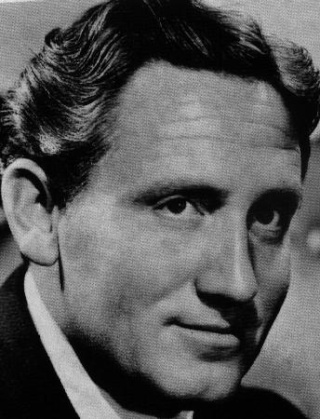 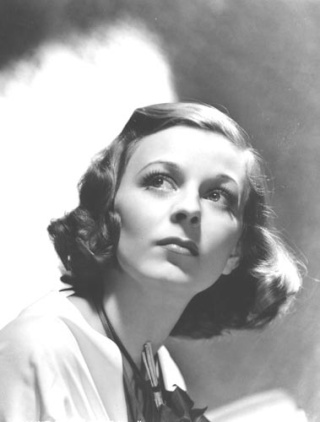 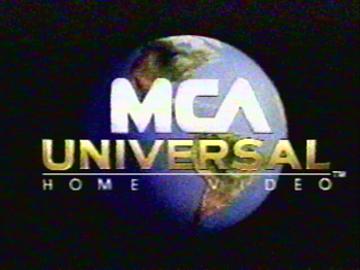 When the movies of Deanna Durbin were released on VHS by MCA/UNIVERSAL in the mid-1990's, they quickly became the best selling series of "classic" movies in the corporation's history, outselling contemporary performers like Bing Crosby, Marlene Dietrich, Claudette Colbert, Abbott and Costello, Ma & Pa Kettle and the Universal Horror series of movies. MCA/UNIVERSAL made a reference to that fact in the introductory comments to the second set of Deanna Durbin VHS releases when it stated that the second release is "Due to the unprecedented popularity" of the first set of movies!!

Congressman and big game hunter George Tinkham told Deanna Durbin he had seen a picture of her on a poster in the middle of Africa!! 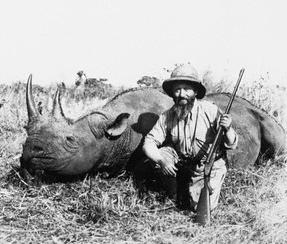 On 24 June, 1939, Gloria Vanderbilt visited California and had lunch with Deanna Durbin at Universal Studios: 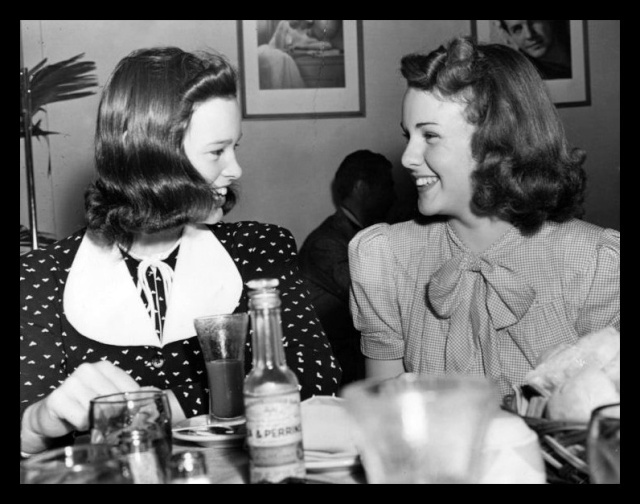 Deanna Durbin with Joan Crawford at the Cafe La Maze: 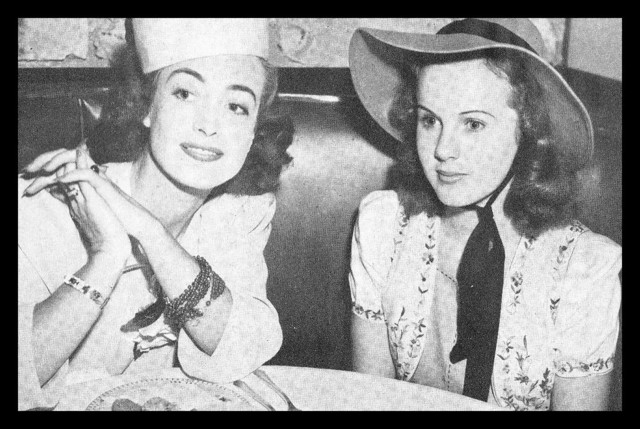 Joan Crawford (1905-1977) was an American actress, named the tenth Greatest Female Star of All Time by the American Film Institute.

Deanna Durbin was asked to play the female lead of the original Broadway production of OKLAHOMA (1943), but Universal Studios refused to loan her out! 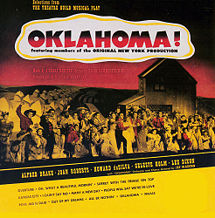 A 1942 photo of Deanna Durbin with Edward G. Robinson: 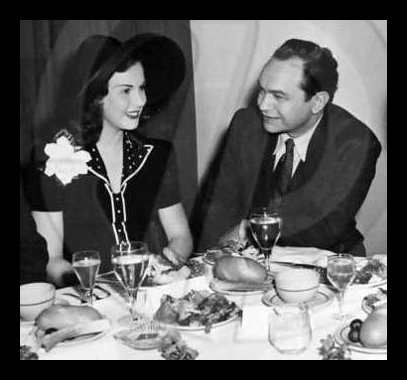 Gloria Jean (born Gloria Jean Schoonover on April 14, 1926 in Buffalo, New York) was an American singer and actress who starred or co-starred in 26 feature films between 1939 and 1959. She also made radio, television, stage, and nightclub appearances.

Let it not be said that Deanna Durbin hasn't a sense of humour. Particularly when it comes to laughing at herself. One of her favourite stories was told her by Andy Devine. Seems that rotund Andy was in an elevator, taking up more than his share of room, no doubt, when he overheard two women squeezed in the corner talking about him. "He’s an actor," one of them whispered. "I saw him in a picture with that girl who sings, oh, you know who she is – Drena Drubin." Ever since then Deanna has called herself Drena Drubin. "I feel like a character with her bloomers showing," she said. 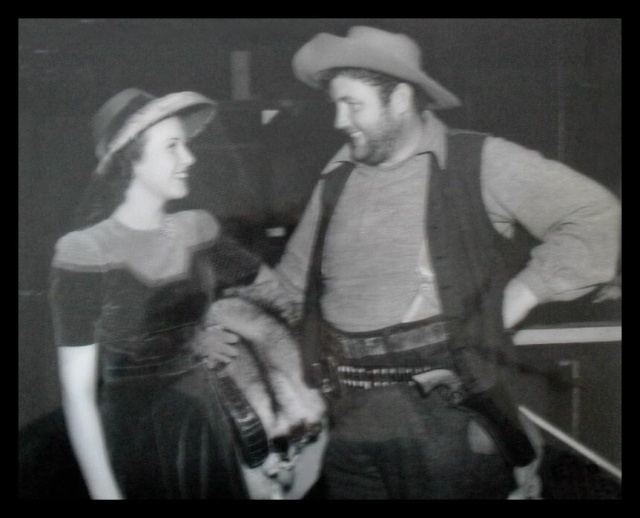 Deanna Durbin with Janet Blair and Helen Hunt at a Coiffure Guild banquet in Los Angeles: 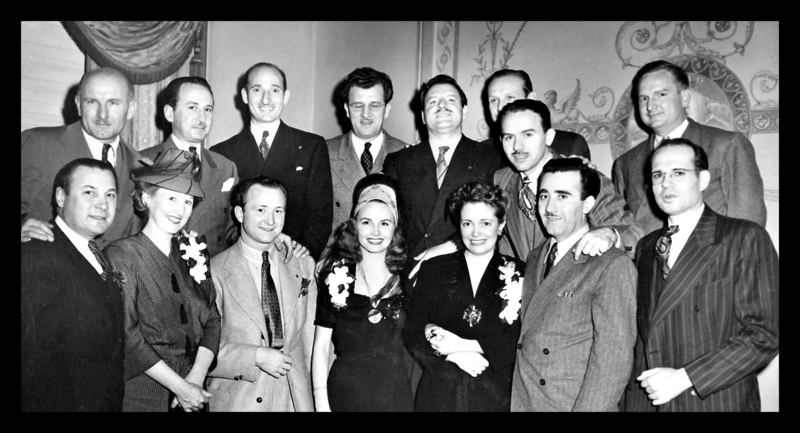 In 1938, Olive White won a suit against Jack Sherrill and Frederick Falin for one third of the commissions they received on Deanna Durbin's movie and radio earnings. Judge Stutsman held that an oral contract did exist between Mrs. White and Mr. Sherrill. Mrs. White testified: "I got a call from Mrs. Rita Warner (employee of Jack Sherrill). She asked me if I knew any amazing child talent. I told her, yes. Then she wanted to know if she was very amazing, and I said in my opinion that she was better than Melba ever was." Mrs. White then related to the court that at the instigation of Mrs. Warner she arranged for an audition late that afternoon in November, 1935. "They met me on the sidewalk outside the studio where Deanna was studying. I raved about the girl and I wanted to know where I came in on this. Sherrill said: If she is as good as you say she is, we split it three ways. So I took them into the studio. Deanna was singing the scales with Ralph Thomas at the piano. I had her sing four or five songs. Sherrill liked her immediately and said not to worry as she would make us plenty of money." Further testimony of Mrs. White was to the effect that she introduced Sherrill to Deanna's parents, and characterized him as an excellent agent and honourable man. Deanna's career began to take off with work obtained on the radio. At a time when Deanna was earning only $150 a week Mrs. White said that Sherrill told her, "I have to run around like a maid; I have to take her to the Trocadero, and her sister always has to go along, and I pay the bills. I have to borrow money to see that she is seen at the right places. When she gets to making $1000 a week there will be something to divide. I will call you up to come and get your third."

NOTE: Jack Sherrill's niece is a member of the Deanna Durbin Devotees.